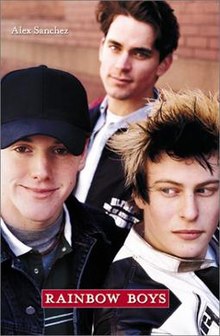 Here, we follow three gay boys in high school who are still closeted apart from one of the boys. Now that’s the hardest period in a person who is LGBTQIA+. Something that I notice straight out was that the language has changed from then to now. For example, the word “queer” is given a bad light. However, the word “queer” is now being widely used in the LGBTQIA+ community. I felt that the wording is a bit outdated, and I didn’t like the cover, but that’s just my opinion. My rating is 2/5 stars.

Jason Carrillo is a jock with a steady girlfriend, but he can’t stop dreaming about sex…with other guys. Kyle Meeks doesn’t look gay, but he is. And he hopes he never has to tell anyone- especially his parents.

Nelson Glassman is “out” to the entire world, but he can’t tell the boy he loves that he wants to be more than just friends.

Three teenage boys, coming of age and out of the closet. In a revealing debut novel that percolates with passion and wit, Alex Sanchez follows these very different high-school seniors as their struggles with sexuality and intolerance draw them into a triangle of love, betrayal, and ultimately, friendship.

In the second book, we see the boys growing up and trying to figure out who they are. In this book, the topics of HIV is dealt with and sexually transmitted diseases. One of the boys falls in love with a guy who was HIV positive, and that broke my heart. Sadly this is more common with same-sex relationship during unprotected sex. In my opinion, this book is better than the first. I gave this book three / five stars.

Jason Carrillo, the best-looking athlete in school, has had his eyes on the prize from day one: a scholarship for college. But then his eyes turn to love — and Kyle.

Kyle Meeks, swim team star and all- around good guy, is finally in the relationship he wanted. Being in love
feels so good, in fact, that he can’t imagine giving it up to go to Princeton.

Something he’s worked for his entire life.

Nelson Glassman, outgoing and defiant, might be HIV positive. Jeremy, the boy the loves, is HIV positive. Although Nelson fears testing positive, if he is infected Jeremy might stop protecting him and pushing him away.

They can be together.

High school’s almost over. Graduation is ahead. Life’s a bowl of cherries, right? Right…

So this is the end of the trilogy, and the boys go on a road trip right before going to college. Since Kyle ( one of the three) was invited to do a talk about coming out in one of the more LGBTQIA+ friendly colleges. We see relationships being tested and that tells that the main characters are human after all. I gave this book a three out of five stars.

Jason Carrillo came out to his basketball team senior year and lost his university scholarship. Now, with graduation behind him and summer ending, he’s asked to speak at the opening of a gay and lesbian high school across the country. But after spending years in the closet and losing his scholarship dream, what message can he offer?

Kyle Meeks is getting ready to go to Princeton in the fall and trying to see as much as possible of his boyfriend, Jason, before they have to separate. When Jason tells him about his speaking invitation, Kyle jumps at the chance to drive across country with him. Yet he can’t help worrying: Will their romance survive two weeks crammed together in a car?

Nelson Glassman is happy his best friend Kyle has found love with Jason. Now he’s looking for his own true love — and hopes he might find his soul mate during the road trip. But will being the “third wheel” in a trio ruin his friendships with Kyle and Jason?

During an eye-opening post-graduation summer road trip, each of the three very different
boys also embarks on a personal journey across a landscape of love, sexuality, homophobia,
and above all, friendship.